The Internet is filled with inspirational stuff for you to look at instead of doing whatever it is you should be doing. That’s okay. I imagine it works for some people.

Being an author is tough, especially in the year 2015. There are a lot of us. The market is flooded and that’s really not a great thing. I’m not suggesting that we should do anything to buck the trend, but the simple truth of the matter is that there’s a lot of stuff published that isn’t worth reading.

It’s true. The only people who can truly be blamed are those who put error ridden crap up on Amazon, and no, I’m not singling out self published people. Which brings me to the question presented as the title of this article.

Here is an image I see on the Internet at least once a week. “Other authors are not my competition. I stand with them, not against them.” 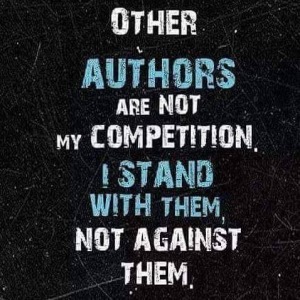 Other authors are your competition. When a person buys a book that isn’t yours, they chose someone else over you. They may not know who you are, but it doesn’t matter. A book was sold and it wasn’t yours. You lost out on that.

The reason I hate that picture is because of the second sentence. It implies that treating your fellow authors as competition means you’re against them. That’s just silly.

Now this might anger you if you don’t know me. “How could he possibly say such a thing? Madness.” Not at all.

Saying “we’re in this together” is comforting for many people, especially since most publishers offer next no marketing support. Your buddies can do wonders for your career. I care about my author friends.

Do I care about the rest? Sort of. I don’t mean that facetiously either. Only that, I don’t particularly care if authors I don’t know succeed. I don’t wish them ill, I just want to be better than them.

The only real catastrophic disaster that would ensue if all publishing stopped for a year would be that bookstores would likely all go under. Readers wouldn’t run out of books. We don’t need any more authors.

That’s not to say I’m not supportive of people who aspire to be authors, though I’m naturally skeptical until they actually start writing. I just acknowledge the facts of the world we live in. There are rankings for a reason. Many of us want to be number one. That means someone else has to be number two.

I love my author friends and know that none of them will take offense to any of this because they know it’s true just as well as I do. The theme song to Pokemon starts off with “I want to be the very best, like no one ever was.” Children’s cartoons are usually right.

Other authors are your competition. That doesn’t mean it’s all out war like The Hunger Games. Although in keeping with that, we can learn something from Suzanne Collins.

One thought on “Are We Really In This Together?”