This a question that I’ve seen countless times over my writing career and wanted to weigh in. If you follow any book blogs or book related accounts on social media, you’ve probably seen the term “indie author” used before. While there are countless memes that say “support indie authors,” there’s also a fair amount of confusion as to what the term really encompasses.

Much of this blame falls on the word itself. People take indie to mean independent and therefore, self-published. That’s a fairly logical train of thought.

Except for the fact that indie is a term that’s been used in the arts, including literature, for far longer than self-publishing has been a prominent practice. Indie films aren’t necessarily completely funded without studios and indie music isn’t always recorded without labels. To say that indie books must only be self-published takes an unrealistic deviation from the way we’ve used the term for decades.

Indie doesn’t mean independent. It means, independent from a major backer. The film, music, and publishing industries all have similar structural hierarchies in the sense that the top is dominated by a few huge companies, with smaller companies further down the ladder and self-funded artists at the bottom of the ladder.

So why the indie label if we have easier terms to tell books apart based on their production history? There’s a simple answer for that too. Aesthetics.

Calling yourself an indie author is a lot more fun to say than telling people you were published at a small press. Say “indie” and “small press” out loud if you don’t believe me. Furthermore, the word “self-published” is still stigmatized by many people. In that regard, indie serves as a euphemism to use to those who may not check out your work otherwise.

Is it useful? Those memes exist for a reason. Some readers do like to feel like they’re supporting the underdog. There is of course, the flipside, the people that may view indie works as of a lesser quality. There isn’t really a right or wrong answer.

Beyond that, it’s a branding nightmare. Do you think an average reader knows what a hybrid author is? Do they care?

As an author, you need to be conscious of the image you project to y 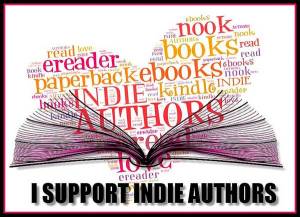 our readers. I see authors complain that their blog posts aren’t translating into sales when their blogs are basically all writing talk that an average reader wouldn’t find interested. I created ASOBAW to have a place to talk about books, while my general interest articles remain at my author site.

Does the indie label matter? Kind of. I don’t particularly think of it as a big selling point, but the amount of people who fumble to define an intentionally broad term is concerning. Pick your labels wisely and for good reasons.

Me? I’m just a writer. You should read my stuff.